What's the Point of Praying? 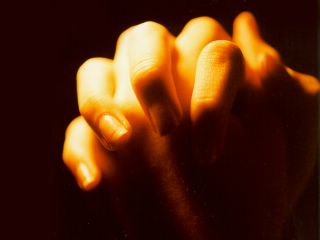 "My vacation was great!" my friend M joyfully reported at our church small group. "I didn't have any back pain the whole time."

When I heard this good news, I wanted to jump up and shout, "Woo hoo! I prayed for you every day, M!" But something held me back. I thought to myself, Hey, what did you do for M's back? Nothing! It was just a God thing, so keep your prideful little trap shut.

A few weeks before, our small group leader had asked each of us to write a prayer request on a piece of paper. Then we took turns selecting each others' requests out of a hat. We were supposed to pray for that request for the week, and I did. I really wanted to tell M I'd prayed for him, but part of me felt it was somehow wrong. It seemed like saying, "I prayed for you," would be stealing some of God's thunder. So I kept quiet.

As I headed home after small group, some familiar doubts popped into my mind. Why did I pray for M? Didn't God already know what everybody needed? Wasn't God going to do whatever he pleased anyway? Why did I pray at all?

Now, I know there are plenty of good reasons for praying: We pray to remind ourselves there is a God who's bigger than us. We pray to include God in our lives, to keep him in our conversations and thoughts. We pray for things more than once because the Bible says our persistence gets noticed (Luke 18:1-8). We even pray simply because Jesus did, and the Bible says we're supposed to pray (Philippians 4:6-7).

But knowing all these reasons doesn't stop my brain from questioning the purpose of prayer every once in awhile. That's when I have to make a choice. Do I get frustrated with the questions, throw up my hands and shout, "Yeah, what's the point?" Or should I face off with the questions, talk to God about them, and perhaps learn something he wants to show me?

I decided to let the troubling questions sit in my head, and to pray about them. The next day, I got my answer. I remembered a recent conversation with my husband that went something like this:

ME: Honey, I'm going to the grocery store. Do you want anything?

ME: Well, what do you want?

ME: What is "something good"?

ME: Yes, I know what you like. But what, specifically, do you want?

ME: What is good?

(The conversation goes on for another 20 minutes, then finally ... )

All to say, my husband wanted his favorite sandwich items. Thing was, I already knew exactly what he wanted. I had these things written on my shopping list. But I really wanted him to ask me. Why? Well, I guess it makes me happy to hear he trusts me to meet his needs and take care of him. And I just enjoy when he asks. 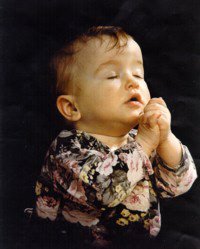 This got me thinking: Maybe God likes to be asked, too. Maybe God especially enjoys when I say, "Hey, Dad, I don't need anything for myself today. But would you do something for my brother M? He really needs your help."

Has a child ever asked you to do something for their friend or even a stranger? It is overwhelmingly moving--if you've experienced this, you know exactly what I mean. We're made in the image of God, so it follows he's probably moved when his kids pray for each other, too.

Of course, this was just me speculating about God--until I looked up an old, familiar verse: "Ask and it will be given to you; seek and you will find; knock and the door will be opened to you" (Luke 11:9, NIV). Somehow, I'd never before noticed the example Jesus gives preceding this verse:

Then [Jesus] said to [his disciples], "Suppose one of you has a friend, and he goes to him at midnight and says, 'Friend, lend me three loaves of bread, because a friend of mine on a journey has come to me, and I have nothing to set before him' (Luke 11:5-6, NIV).

This request for bread is made for the benefit of the host's friend. (Kind of like how I asked God to help M because I had no means of helping my friend.) Additionally, we know the journeying friend has approached the host with his need for food. (Kind of like how M shared his prayer request about his back pain.) And the passage continues on:

So I wrote this little blog entry to tell M: My friend, I prayed for you every day. It makes me feel really good that God took care of you.

And next time, I'm just gonna tell you so.

To ponder:
1) Do you tell your friends you're praying for them? Why or why not?

2) What stops you from praying? What fears and questions enter your mind when you pray?

3) Is it harder for you to pray for yourself, or for other people?
4) What makes specific prayers difficult for you? (For example, maybe you've prayed for yourself or someone else in the past, and God didn't give you or your friend the thing you asked for.) What makes specific prayers easy for you? (For example, maybe you've built up a lot of trust with God in an area of your life.)
Posted by Holly at 3:16 PM

A couple years ago I won a really large amount of money on a TV game show. The day that I won the money, I really recognized the presence of God in the events that had happened that day and how they played out, and I was so grateful to God that he had given me the energy and the skill that day to do so well on the show.

A few months later, weeks after the show had aired, Brooke came up to me and said that his family had watched a tape of the show, and Eden, who was four years old at the time, had watched the show also. Not understanding that the events on the tape had already long ago taken place, Eden kept praying that "Kyle's daddy" would win, and she got so excited when I eventually did win, because she felt like God had answered her prayers.

I was so moved by that story because it gave me a new perspective that perhaps God allowed me to win not only to be a blessing to me and my family, but because he knew that three months later a four year old, exercising the pure faith of a child, would be earnestly praying for the outcome, and he cared just as much about validating her faith later on as he did about increasing my bank balance that day.

The mysteries of prayer are deep, but I often wonder if God didn't bless me more because of a child's sincere prayer than because of anything I did to deserve it.

Thanks for sharing that story, Kevin. There's much to be learned from how kids pray. They pray for other people. They pray without fear or hesitation. They pray with joyful expectation, and they celebrate when their prayers are answered.

I was about 5 when my grandpa died, and I asked God to give me a sign Grandpa was in heaven. I got that sign in a big way: an unusual, rainbow-like light streaming through a hole in the gray, cloudy sky just over my grandparents' house. When my mom and I saw it, I told her, "That's where grandpa went into heaven," and she burst into tears. (Apparently, Mom was hoping for a sign, too.)

Mom had never seen anything like that light in the sky. Over the years when she and I described it to others, we never met anyone who'd seen what we'd seen. Then one day when I was in college, a friend came knocking frantically at my door. He told me I had to come look at something real quick.

At the time, I thought God didn't want anything to do with me anymore. So when my friend pointed to the sky, I almost fell over. He asked me, "This is really amazing! Have you ever seen anything like it?" And I told him, "Actually, I think I have." It was the same hole in the sky with the rainbow-light I'd seen when I was 5--now shining down over my dormitory. And I knew God was letting me know he still cared about me.

Maybe our prayer should be that we'd pray more like kids do. And that we'd celebrate big when our prayers are answered, too.