Ultimatum to the GOP 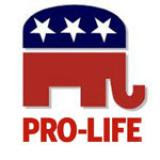 I’m publically issuing this ultimatum to the Republican Party: Take a pro-life stand in a big, visible way, or I’m leaving.

TCW readers will recall that just two months ago, I suggested Christians reserve discussion on abortion for the right time and place. I’m seizing the opportunity presented by a Gallup poll conducted this May, which found 51 percent of surveyed Americans identify as “pro-life,” while 42 percent identify as pro-choice. Get this: It’s the first time there’s been a pro-life majority since Gallup began conducting the poll in 1995. ...