Strictly for the Hard Core: "The Mosaic Law, Today"

An early Christmas present from H-n-T! This is my research paper which addresses the question: "What purpose does the Old Testament law have for today's church?"

To view the paper full screen, click the button on the far right of the Scribd window.


Publish at Scribd or explore others:
Posted by Holly at 12:16 PM No comments:

The Bible on Homosexuality

On my most recent Today's Christian Woman blog post, someone asked for a list of Bible verses that discuss homosexuality. I'm posting them here on H-n-T:

Old Testament
Destruction of Sodom and Gomorrah, Genesis 19
(The people of these cities were involved in all kinds of sexual immorality, including rape, and sex with animals and children. This passage specifically mentions homosexuality.):

4Before Lot and his guests could go to bed, every man in Sodom, young and old, came and stood outside his house 5and started shouting, "Where are your visitors? Send them out, so we can have sex with them!"

Note that when God called for the destruction of cities in the Old Testament, it was because a city had become so reprehensible that God wouldn't put up with their sinfulness any longer. In records outside of the Bible, it has been shown that the Canaanites were highly promiscuous, would have sex with temple prostitutes as part of idol worship, would have sex with animals, and would rape and sacrifice children in the worship of idols. That's why God promised to give Canaan to the Israelites.

Leviticus 20:13:
13It's disgusting for men to have sex with one another, and those who do will be put to death, just as they deserve.

New Testament
The apostle Paul in 1 Corinthians 6:
9Do you not know that the wicked will not inherit the kingdom of God? Do not be deceived: Neither the sexually immoral nor idolaters nor adulterers nor male prostitutes nor homosexual offenders 10nor thieves nor the greedy nor drunkards nor slanderers nor swindlers will inherit the kingdom of God. 11And that is what some of you were. But you were washed, you were sanctified, you were justified in the name of the Lord Jesus Christ and by the Spirit of our God.

Notice that other types of sexual immorality--and specifically adultery--are included in this list along with homosexuality.

Romans 1
(In this chapter, Paul is outlining how man has turned away from God since creation):

24So God let these people go their own way. They did what they wanted to do, and their filthy thoughts made them do shameful things with their bodies. 25They gave up the truth about God for a lie, and they worshiped God's creation instead of God, who will be praised forever. Amen. 26God let them follow their own evil desires. Women no longer wanted to have sex in a natural way, and they did things with each other that were not natural. 27Men behaved in the same way. They stopped wanting to have sex with women and had strong desires for sex with other men. They did shameful things with each other, and what has happened to them is punishment for their foolish deeds.

1 Timothy 1:
8We know that the Law is good, if it is used in the right way. 9We also understand that it wasn't given to control people who please God, but to control lawbreakers, criminals, godless people, and sinners. It is for wicked and evil people, and for murderers, who would even kill their own parents. 10The Law was written for people who are sexual perverts or who live as homosexuals or are kidnappers or liars or won't tell the truth in court. It is for anything else that opposes the correct teaching 11of the good news that the glorious and wonderful God has given me.

In Paul's letter to Timothy, he includes a list of people who do things in opposition to the Mosaic Law (Torah). This isn't meant to be a comprehensive list, but rather, is a summary of some ways in which the Law is broken.

Big point here is homosexuality (as well as pre-marital and extra-marital sex--and, of course, bestiality, rape, and sex with minors) is in opposition to God's model for sex.

While Jesus never directly discusses homosexuality, he does offer an example of the Genesis creation account in discussing divorce:

Matthew 19:
4"Haven't you read," he replied, "that at the beginning the Creator 'made them male and female,' 5and said, 'For this reason a man will leave his father and mother and be united to his wife, and the two will become one flesh'?

One post to this blog (from David) said, "At the same time, we ignore Matthew 19, where JESUS says one of the reasons men don't marry (women) is because God made them that way."

What Jesus says refers to eunuchs, men who are born with defects that make them unable to have sex:

11Jesus replied, "Not everyone can accept this word, but only those to whom it has been given. 12For some are eunuchs because they were born that way; others were made that way by men; and others have renounced marriage because of the kingdom of heaven. The one who can accept this should accept it."

David, if you are implying that Jesus is defending homosexuality here, that is a false characterization of this passage.

Always a good reminder: We need to be careful when we apply Scripture to our lives today to first consider the historical and cultural context in which it was given. And we need to not bend the meaning of words. This passage is about men who can't have sex: 1) due to birth defects, or 2) due to accidental or purposeful castration. It also discusses that some men won't marry (and will abstain from sex) because they have dedicated themselves to the work of ministry.

As a side note, the point Jesus is making in the Matthew 19 passage is that husbands and wives should stay married. Jewish law had been interpreted such that men could divorce their wives for any reason. I think this verse could be applied as a strong statement against no-fault divorce today.
Posted by Holly at 11:43 AM 6 comments:

Taking a Stand for Marriage 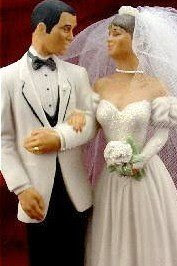 Taking a Stand for Marriage
My vote on Proposition 8 was obvious, yet painfully difficult.
http://blog.todayschristianwoman.
com/walkwithme/2008/11/
taking_a_stand_for_marriage.html
Posted by Holly at 10:25 AM No comments: