The Meme Challenge, Day Two: Being a Representative of Christ

I sometimes get a little scared when people ask me, “What do you do for a living?” I gauge their reaction, watching their body language as I say, “I’m in seminary right now, and I write for several Christian magazines.” Some people shuffle around uncomfortably, or they look away from me. Some light up with big smiles across their faces. And some nod matter-of-factly, as if I’d said, “I’m a file clerk at the library.”

I get scared because the moment I say it, I know some people will classify me. Some will think I’m judging them because “Christians think they’re perfect” (I’ve been told as much). Others will express enthusiasm that I’m a member of “the club” (I’ve been told something along these lines, too—ew!). I wonder if some Christians will dismiss me because I don't meet their high, holy expectations. And among those who aren't believers, I worry that my words and actions will define Christianity for them; perhaps they won't want to look any further after they've met me!

This scares me because I’m a Christ-follower—I’m not Jesus Christ. I’m one of the king’s messengers, not the king. I’m troubled when I’m told to “be Jesus,” or that I’m the “only Jesus some will ever see.” This too often is a call to act perfect, happy, and complete; we become like the Pharisee in this parable Jesus told:
___________

To some who were confident of their own righteousness and looked down on everybody else, Jesus told this parable: "Two men went up to the temple to pray, one a Pharisee and the other a tax collector. The Pharisee stood up and prayed about himself: 'God, I thank you that I am not like other men—robbers, evildoers, adulterers—or even like this tax collector. I fast twice a week and give a tenth of all I get.'

"But the tax collector stood at a distance. He would not even look up to heaven, but beat his breast and said, 'God, have mercy on me, a sinner.'

I want people to see my flaws and shortcomings, so they will understand my need for Jesus—and hopefully, theirs, too. And I really want to become comfortable just being myself, as God created me to be.

To ponder:
1) Why is it difficult to let others see our flaws, shortcomings, needs, and dependence?

2) Consider 2 Corinthians 12:9-10. According to the Apostle Paul, why is weakness important?

3) Why do you need Jesus? How would you explain this to someone?

MORE:
Is the Perfect Christian Coalition My Biggest Critic?

Atheists Get Vocal When Christians Get Arrogant

Generation Exodus: Why do so many young people leave the church?
Posted by Holly at 11:36 AM No comments:

The Meme Challenge, Day One: Why Does God Allow Suffering? 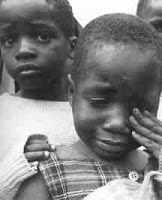 Day 1
On My Biggest Faith Struggle

I wonder why God allows suffering.

There are plenty of good reasons for suffering offered in Scripture: to discipline or to prevent sin (Hebrews 12:7, 11; 2 Corinthians 12:7); to develop perseverance, character and spiritual maturity (Romans 5:3-5; James 1:2-4); to prepare us to comfort others (2 Corinthians 1:3-4); to provide opportunities to share our faith and spread the news about Jesus (Philippians 1:12); to follow Jesus’ example and thus bring honor to him (1 Peter 4:12-14); and to show genuine faith and thus bring honor to God (1 Peter 1:6-7).

And I know we live in a tainted, broken world. Humanity and the entire world is imperfect because, by failing to give proper respect to God, we’ve distanced ourselves from the perfection that is God. Yet the all-powerful God who made us doesn’t force us into obedience. God wants real love and respect—these aren’t real if they’re not given freely (if you had to pay people to be nice to you, could you really call them your friends?). So suffering reminds us that we aren’t self-sufficient, and it can cause us to consider God.

Still, it’s hard to get my head around suffering because of the simple question, “If God is good (if his nature and character is absolutely good) and he loves us, then why does he allow bad things to happen to us?” Parents allow their children to make mistakes, and they punish their kids when they misbehave. But would a good parent punish their good child? Does God allow bad things to happen to people who love him in order to keep things fair, or balanced, so humans won’t automatically obey God out of fear (“If I obey God, nothing bad will ever happen to me.”)? Does suffering keep our love genuine? The questions go on and on.

I’m actually glad I have questions and faith struggles. If I understood everything about an all-knowing, all-powerful deity, I’d either be a deity myself (and I’m quite certain I’m not) or I’d be lying to myself about my ability to comprehend God. To me, doubt is an essential part of faith.

To ponder:
1) What questions do you have about God and suffering?

2) What is your biggest faith struggle?

MORE:
Questioning God: Is It OK to Wonder Why He Allows Suffering?

Room for Doubt: The Faith Crises of Bill Lobdell, Mother Teresa, and Holly

More Thoughts on Faith (Or Lack Thereof)
Posted by Holly at 2:19 PM No comments:

LaTonya of GospelGal.com tagged me with a meme. A “meme,” apparently, is an idea that’s spread from blog to blog. Which means: I still don’t know what it means.

I will, however, play along, as LaTonya is a good buddy and it seems I’m “it” at the moment. Besides, it's cool to be the it-girl for once.

Here are the rules of this meme:
1) Link to your tagger and post these rules on your blog.
2) Share 7 facts about yourself on your blog, some random, some weird.
3) Tag 7 people at the end of your post by leaving their names as well as links to their blogs.
4) Let them know they are tagged by leaving a comment on their blog.

Since I tend to prattle on and on, I’m gonna talk about seven concepts I think about a lot, and I’ll do this over seven days in seven posts. Here are the topics I’ll discuss this week:

Please send me an email if you’d like your blog to get tagged and play this goofy little game. Or you can nominate somebody’s blog that you like (or, perhaps more appropriately, someone you don’t like). I will tag seven people at the end of the week.
Posted by Holly at 1:58 PM 1 comment:

Wearing Faith on Our Sleeves 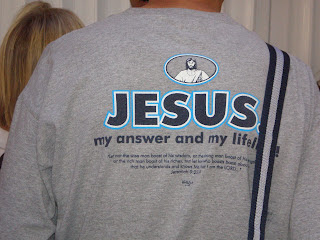 Secondhand Witnessing
We can’t expect T-shirts, jewelry, and bumper stickers to do all the work.
http://blog.todayschristianwoman.com/walkwithme/2008/07/secondhand_witnessing.html

To ponder:
1) Think about your actions (the way you live) and your friendships (particularly, the way you listen). How do these factor into the way you witness?

3) Think about someone with whom you'd like to share your faith. How much do you know about them personally? How much time do you spend with them socially? How much do you know about their spiritual background? (For example, how do they view God? How do they view organized religion? If they went to church and/or believed in God in the past, why did they stop?)

4) Some people perceive Christians as snobby perfectionists who look down on others. Sometimes, the most effective way to witness is to reveal where you've struggled and failed, and how God has helped you through rough times. How well do others know you? Think about specific stories that illustrate your struggles/failure so you'll be prepared if you get the opportunity to share these.
Posted by Holly at 11:43 AM 1 comment:

Is It Wrong for Abused Spouses to Divorce?

From Holly's "Walk With Me" blog:

Barbara writes: My marriage ended after 22 years of physical abuse. I took my vows seriously and hung in there, even learned Tae Quan Do to stop the abuse. It still hurts to read about divorce in the Bible and sometimes I wish I had stayed, but I felt my life was in danger by the time I filed. Not easy to do. Marriage is so wonderful when done right and such hell when not.

Holly says: Barbara, thank you for sharing your personal story. It brings up a very important point: God doesn't expect us to stay in physically abusive relationships. While there are passages that instruct Christians to "turn the other cheek," this is about insult, not injury. There's nothing in the Bible that indicates God expects a spouse to continue to be injured.

Instead, the Bible instructs that men should love their wives as Christ loves the church. The passage in Ephesians 5 is often read starting at verse 22, which states that wives should submit to their husbands. But we should also consider verse 21, which says all believers—women and men alike—should "Submit to one another out of reverence for Christ" (emphasis mine).

Further, 1 Corinthians 13 tells us what love isn't: It's not self-seeking or easily angered, and it doesn't delight in evil.

Love is kind. It always protects.

The Law in the Old Testament instructed the Jewish people to treat each other well. For example, the Law provides very specific instruction on how slaves were to be treated fairly and with kindness. If a man married his slave, he was obligated to always provide her with food, clothing, and sexual relations. If he denied her these things, she was legally able to leave him as a free woman—an example of a woman being free to divorce.

Another example of divorce is found in 1 Corinthians 7:15: If an unbelieving spouse leaves a believer, "let him do so. A believing man or woman is not bound in such circumstances." In this passage, the apostle Paul instructs the believer to stay in the marriage unless their unbelieving spouse wants to call it quits. I think it's important for us to recognize we can't expect unbelievers to follow the same moral standards that are set for Christians in the Bible; unbelievers haven't made a commitment to obey God.

In marriage, we publicly make vows to each other before God. Couples make a covenant with each other and with God. If a partner becomes abusive, they've broken the covenant with both their spouse and with God. And if the abusive partner is unwilling to change their behavior, I believe God recognizes the marriage covenant as broken—the abused person is released from their obligation.

Barbara, I hope you will find continued peace and healing.
Posted by Holly at 12:22 PM 1 comment: