Science, Too, Requires a Leap of Faith 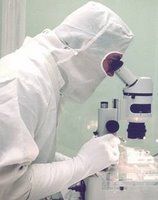 SPECIAL GUEST COLUMN
I've long thought of science and religion as opposites. Science, I thought, was tested, proven, fact. Religion was experiential, impossible to prove, and based on beliefs that arose from internal feelings.

So I was blown away when my friend Paul told me science isn't as actual and factual as I believed. Paul is a physical chemist, hard core as they get (meaning: I rarely understand a thing he says.) He wrote the following piece about how science requires a lot of faith--and how science and religion actually have a lot in common. (And thankfully, he's used very small words to help me understand.) -H

Much of society today misunderstands the whole premise of science. People hold a perspective that everything we observe in the physical world around us is rigorously provable through the inter-marriage of math and science. This is decidedly untrue. In a modern world, where science and society are inextricably interwoven, a clear view of science is critical to the health of that society.

As an example, let’s consider Newton’s first law, which states that force equals mass times acceleration. This really just means, for example, that if you push a chair that’s standing still, it will move. However, if you push a chair the size of Texas, it will not noticeably move, because it’s too massive. These ideas are what we would call common sense, because we have built up a huge set of evidence over the course of our lives by moving chairs, cars, doors, keys, our bodies, and countless other items … but that’s all the proof we have.

We cannot prove Newton’s first law via mathematics. So is it true? Unfortunately, we can never really know if it’s right or wrong, true or false. We can only point to about 330 years worth of experiments and experience that no one has ever measured a violation of this law. It’s simply a mathematical description that appears to be very accurate.

All of science rests on this and a few other laws that have held up to as much scrutiny as we care to give them, but can never be proven. From these unprovable laws, we can rigorously derive other, more sophisticated relationships to describe the world around us. An example of this is Bernoulli’s Principle, which is derivable from a set of these unprovable laws, and which describes the physics of how an airplane stays in flight. Let me restate this in another way so that we are very clear about it. Since we cannot prove Newton’s laws rigorously, we can never prove Bernoulli’s Principle rigorously (because we have to start with Newton’s laws), but we have enough faith in them that we step onto an airplane and let it take us several miles above the ground in flight.

Consider what would have happened if centuries ago everyone would have simply rejected Newton’s laws because he couldn’t prove them mathematically. Technology today would probably be stuck in the 1700s or 1800s. Instead, scientists decided to test the principles and determine if they are accurate descriptions for the physical world, if they can accept them without proof. Through the laws of science, the complicated physical world makes sense.

So how does this relate to society, then? Science appears from the outside to be a rigorous series of well-structured proofs, a series that might even appear to extend forever. It does not. It extends back to its foundation in Newton’s Laws, to a few good premises. The danger in this misconception is that we are tempted to believe that anything that is true is provable because we think (mistakenly) that everything in science is provable. Anything that cannot be proven is supposedly to be rejected.

We are tempted to

that is true is

everything in science is

This is often a main objection to religion. "You can’t prove to me that there’s a god." True. But if we choose this philosophy, we must reject all of science as well by the same argument, because we can never get past the foundation of unprovable laws.

Surprisingly, religion works very similarly to science. As an example, consider the Bible. It begins with a basic premise, "in the beginning God created the heavens and the earth." It does not seek to prove the existence of God, just like no scientific research, experimental or theoretical, is currently underway to prove Newton’s laws. The Bible instead assumes God’s existence to be true.

We should not stop to argue whether or not the existence of God is provable, or whether or not the Bible is God's attempt to communicate with us. Rather, we can approach the Bible with similar tools from science. Given these two postulates, that God exists, and that he chooses to communicate to us through the Bible, we can begin to test the statements of the Bible and determine if they correlate well to our experience. One testable statement in the Bible is "draw near to God, and he will draw near to you." If we begin to seek a relationship with God, he will draw near to us. We will never be able to prove that God exist this way, but we can build up a lifetime of evidence that his existence correlates extremely well with our experience.

I would like to comment briefly on testing and experimenting with God’s promises. In science, we must be very careful on how we conduct experiments to test a hypothesis. We conduct and experiment and relate our findings to other people. When we have sufficiently tested a subject, we can feel fairly justified in our conclusions. We must take the same care when examining the Bible. If I want to test the principles of quantum mechanics, I have to think very carefully about my experiment. I can’t just say, "if quantum mechanics is true, then I’ll walk outside today and see a woman with a red jacket and green umbrella who is tap-dancing." When I walk outside and don’t see this woman, I quite erroneously conclude that quantum mechanics is wrong. I must think carefully about how to determine if by drawing near to God, he is drawing near to me.

To ponder:
1) Consider these two definitions from The American Heritage Dictionary:

FAITH: Confident belief in the truth, value, or trustworthiness of a person, idea, or thing.

In your opinion, how are science and religious faith alike? How are they different?

4) H mentioned she finds it difficult to understand Paul when he uses science terminology. In the same way, it can be difficult for people to understand when someone is speaking "Christianese."

Try to state or write down the basic beliefs of Christianity without using any Christian jargon. For example, don't say, "I've been saved by Jesus' blood." Explain what it means to be "saved," why it was necessary for Jesus to die in relation to the Hebrew tradition of sacrifices. Using very basic language, explain what "sin" and "forgiven" mean. This exercise is extremely helpful when explaining Christianity to a child or to an adult who hasn't attended a church regularly. It also can help Christians see their own faith in a new light.
Posted by Holly at 2:39 PM

I used to give a talk about "Do You Have Enough Faith To Not Be a Christian?"

People don't realize that either position requires faith in certain assumptions. And that some of the explanations proposed as plausible by those opposed to Christianity take an astounding amount of faith to accept. More faith, I feel, than what is required to be a Christian.

Faith is not just required to believe in God or be a Christian. People often don't think about the fact that, if you don't believe in something, that is also a commitment too, and you have to evaluate whether you can reasonably accept the alternatives to the thing you profess not to believe.

There are different kinds of proof. In criminal law, we speak of "proof beyond a reasonable doubt." The judge will caution jurors to realize that this is not absolute proof, since nothing in human affairs can be held up to a standard of absolute proof. But "proof beyond a reasonable doubt" means that, after weighing all the evidence, the juror is left with an abiding conviction of the truth of the facts. And by those types of standards, I think it is reasonable to talk about empirical tests for Christianity and God. There is good solid evidence to believe in the existence and Deity of Christ and His resurrection, as well as the existence of God, His role as Creator and His inspiration of the Bible. These things can be tested with facts of history and science, as well as with philosophical reason, and finally with personal experience. And it is possible to feel an abiding conviction of the truth of the Bible, based on a thorough examination of the evidence that God has left in nature, in history and in our lives.

Well said, Scully48! That's something I'd never before considered: how much faith it takes to not believe in God. With all the amazing detail in nature and the world around us, one would certainly need to be convinced that it was all the result of some random mutations.

I've heard stories of how children in atheist families will secretly pray or express skepticism about their parents' beliefs. It seems all children, regardless of where they're born, express faith in a single higher power. It's only later we develop opinions about God based on the experiences we have and the people we encounter. Thanks for this interesting food for thought.

Thank you for such an intriguing discussion.

Having been raised by passionately academic, agnostic parents, I've grown up constantly questioning societal/worldly "truths." Any philosophy-- particularly science-- is built upon a "given" foundation (supported by human faith) and constructed outward (relatively) from that point. Even predating Newton, empirical observation has been the staple of our faith in science, which indicates we're naturally prone to walk "in sight" rather than "in faith" (an issue Christianity certainly addresses). Thus there is a distinction between faith based on experience and faith based on condition[ing] of the heart and mind, which is to me why faith in God and faith in Science can appear to be at odds. Certainly history's most influential scientists realized this, following the empirical to the empyrean.

- a seeker of truth