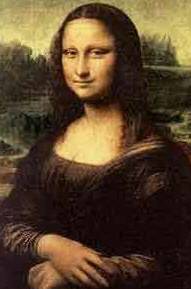 "Every now and then something comes along that's difficult for humans to classify. It's rather bizarre, for example, that a whale is classified as a mammal [though it] lives its life in the ocean ...

"In the world of religious leaders, Jesus is a whale. [He's] often lumped into the same phylum with other great religious leaders, including Moses, Muhammad and Buddha. But frankly, he doesn't fit. On the surface, he looks like a fish (a wonderful religious leader who has helped shape the world of faith and morals), but he taught and claimed something that, when analyzed, makes him a different species altogether. He claimed to be God."

--From The Da Vinci Code: A Companion Guide to the Movie, a Campus Crusade for Christ publication

More:
Jesus and Da Vinci: Who was Jesus, Really?

ChristianityToday.com Review of the Movie

*Quote edited for clarity
Posted by Holly at 11:14 AM

Thanks for the blog link. This looks the makings for a book on Christian business and leadership. I'm not experienced in book publishing, though I'm pretty sure most major Christian publishers can be contacted directly.

Here's a good list of publishers from the Evangelical Press Association website. It lists publishers with links to their individual websites:
http://www.ecpa.org/members_voting.php