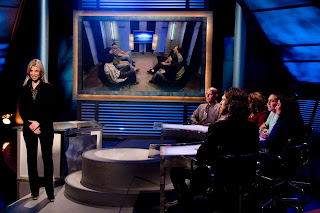 A new game show, Without Prejudice?, seems to encourage that we judge quickly, lest we be judged first. It began airing a couple months ago. I try to keep informed about pop culture and was intrigued, but this was one of those times when I had to question, Is this show gonna mess with my head a little too much? So I didn't seek it out, until this week, when the Game Show Network held a Without Prejudice? mini-marathon. I decided to watch the last 15 minutes of one show, just to take a peek.

The show’s suggested premise is: Can regular people suspend their prejudice long enough to judge others fairly? But, of course, this is reality TV. The actual motive is more like: Let’s incite emotion by having everyday people share the most prejudice beliefs they hold!

Five "regular” folks are selected as judges. Then five "average" people are selected as contestants. As you know, reality TV has a different concept of what constitutes regular and average. There's a transgender contestant, one judge who repeatedly insists everyone loves porn, an early-twentysomething who's been married three times, and an aspiring musician who plans to legally change his name to "Penny Arcade." The judges decide which of the five contestants they'll award with a prize of $25,000, based on the contestants' comments about their upbringing, jobs, personal relationships, and beliefs on pre-selected controversial topics. The judges sit in a seperate room from the contestants. (Hmm ... being judged from a distance ... by a force that can reward you or give you nothing ... and this force doesn't have a relationship with you and doesn't interact with you ... .)

Homosexuality and gay marriage are among the favorite discourse on the show. Of course, I use the word “discourse” loosely, too, since discussion never probes too deep or runs on for more than a minute. The show does devote plenty of time to guessing “Who’s gay?”—this seems to be a side game within the game. Both contestants and judges are questioned about their sexual orientation, as if this should provide an explanation for every thought and opinion they express.

In one episode, a judge who identifies himself as a Christian says he won’t vote for a gay contestant because he doesn’t agree with the homosexual lifestyle. The Christian expresses his beliefs well enough, in a matter-of-fact manner. He’s not sipping on haterade in the judges’ box. Still, the image of a Christian judging a gay man, telling the contestant he’s not good enough for the reward … . I feel for both men. How is the Christian supposed to communicate God’s plan for marriage in an eight-second sound bite? How is the gay man supposed to take away any idea except, Christians hate me because I’m not like them?

I’m repulsed. And yet, I’m hooked. I end up watching more episodes for nearly three hours. I feel disgusted when one judge says he doesn't like black people and won't vote for a black contestant. Then, the self-proclaimed racist ends up selecting a black man as the prize winner. Am I supposed to cheer, believing deeply held racist attitudes have been changed thanks to a 90-minute game show? Don’t think so. I'm instead left feeling this racist judge has insinuated the black contestant is the rare exception within the black community—that most others would indeed live up to the bad qualities that "cause" his racism. It's like receiving the undesirable comment, "I don't see your skin color," which, unfortunately, usually translates to "I like you, so I'll ignore the color of your skin because I can't deal with it."

(Gotta say I’m shocked groups like the NAACP and YWCA have partnerships with this show. I could be wrong—and hope I am—but seems that rather than promoting discussion, Without Prejudice? will encourage people to air their judgmental views publicly. One judge proudly states that he’s just voicing publicly what others are too afraid to say. Does society really benefit from a public podium where people judge one another?)

This also reminds me of friends who’ve said, “Holly, you’re not like most Christians.” When I ask them what they mean, they explain, “Well, you’re not judgmental. You seem open-minded.” This always makes me wonder, Am I wishy-washy on my beliefs? Am I soft peddling Christianity? Rational thoughts take over and I realize my friends probably have met a Christian or two who hurt them. Or, perhaps, they expected some Christian to live up to high standards, then felt letdown when the Christian failed. Or, perhaps, a Christian said something completely true and tried to do this with love, but it was taken with offense. Discovering the source of a friend's frustration with Christians takes effort, time, candidness, and honesty. I’ll never know what caused my friend to have negative feelings toward Christianity unless I continue the conversation.

Real conversation doesn’t happen on Without Prejudice?—in fact, judgment begins even before a word is said. At the beginning of each show, the judges must eliminate a contestant based on how they say their name, age, and current residence. The show's host refers to this as first impressions. One judge chose to off a contestant from Texas because, the judge reasons, Texas is a judgmental state. I want to jump out of my seat and yell, “How on Earth can you judge a state? That’s ludicrous!” I suddenly want to audition for the show, if only to say, "My name is Holly. I'm 33. I live in California. What part of that statement makes you want to hate me?"

Then it hits me: I'm now judging the judges on this television show. I've become the one who, from a distance, passes judgment on the lives of people I've never met. And that was the idea all along, wasn’t it? I hit the off button on the TV, disgusted by the ugliness of my own judgmental heart.

To ponder:
1) Do you believe you judge others? Why or why not?

2) Why do you think we tend to judge each other?

I haven't seen this show, but if it reinforces stereotypes that promote discord, I'm not surprised that it has the support of groups who exist to perpetuate these images. And as with all of reality t.v., you have to wonder how much these are real people and how much they are playing a character to get on reality t.v.