What Would Jesus Do (for Physical Fitness)? 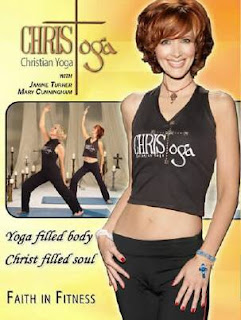 My friend T just sent me a press release for the next great Christian exercise craze: CHRISTOGA!

(Yeah, I knew you'd never believe me, so here's the photo to prove it.)

I admit, at first I had a good laugh. Especially when T said, "Christoga? Seriously? That sounds like something you wear to a Christgreek-themed party. Or a kind of wagon you'd ride in during the United States' Western expansion."

"Next, they'll be selling Christogear and Christowear for Christoga," I replied. "Or maybe we'll be buying environmentally friendly cars with an optional Christomatic gear shift. Or the newest digital camera that shoots perfect photos of the sky and stars, thanks to its Christographic lens."

The "mantra" of Christoga is "Yoga-filled body, Christ-filled soul." In the program, exercisers meditate on Bible verses.

Take "WWJ [fill in the blank]." What Would Jesus Eat? Well, I suppose he'd eat food suited to his time and culture. What Would Jesus Drive? Hmm, perhaps a donkey? Maybe a camel? And how do these aspects of Jesus' life apply to my own? Since I didn't live in that time period or culture, I really don't know. I suppose we can speculate about Jesus' motivation for many things. And I guess it isn't altogether bad to apply that speculation to life today. As long as the bookstores file it under "self-help," and not "theology."

But using our Lord and Savior as a way to sell stuff? Seems like we're wrongly using his name. I don't much like that at all.

Some time ago, I thought someone was wrongly using my name. It appeared someone had registered a blog under the name "Holly Vicente Robaina." I immediately contacted the company that ran that blog service, demanding they investigate the misuse of my name.

Since I'm a writer, my name means everything to me. I could only imagine the charlatan who'd stolen my name was going to write something terrible--with my name on it!--thus tarnishing my hard-earned reputation.

(Thankfully, it turns out, I was the culprit--I'd registered a blog years ago and had forgotten about it.)

I sometimes wonder, What Would Jesus Think ... about the ways we use his name and his image? Back when The Passion of the Christ came out, on hearing Jim Caviezel had the role of Jesus, I told T, "I bet Jesus was hot!" My very wise friend replied with this verse: "He had no beauty or majesty to attract us to him, nothing in his appearance that we should desire him" (Isaiah 53:2). That verse made me think about Jesus in a new way.

What Would Jesus Think ... about the

ways we use his name and his image?

I also think about the diamond-encrusted platinum crosses that rappers like 50 Cent wear. Maybe Fiddy is just expressing his love for Jesus in his own way. Maybe everyone who wears a silver, gold or platinum cross around their neck--from teen-agers to blue-haired seniors--is merely expressing the way they value the cross, as something worthy and precious. But I do wonder, What does Jesus think about the way we've blinged out the old, rugged cross?

Mostly, I wonder how I'm affected by the way our society uses Jesus' name, his image, and symbols representing him. Do I look at the cross as a status symbol? (I can remember wearing lots of cross jewelry in the 80s primarily because it was uber-cool.) When I think of Jesus, do I imagine the European savior in the white robe with the blue sash, his long, brown tresses flowing in the wind? Do I slap the latest Christian bumper sticker on my car because it's clever--a cool way to show others I'm a member of the club?

Or do I think about a dirty homeless man who hung out with the types you'd find on Skid Row? Do I remember he was a laborer? Do the sanitized images in my mind prevent me from seeing how relatable--down-to-earth real--Jesus is?

It's impossible for me to have an accurate image of Jesus, since the best I can do is to measure him by what I've seen and experienced. But I can try to experience more of the biblical Jesus by digging deep into Scripture.

The example Jesus set and the things he's called us to do can be difficult to swallow. I want to be careful that I'm not recreating him to be more palatable or more to my own tastes. I mean, I don't want to start believing Jesus might have done yoga in a belly shirt.

To ponder:
1) In what ways have you made Jesus--and your Christian life--more palatable?

2) What are some possible consequences of glamorizing Christianity?

3) What are some positive and negative aspects of Christian merchandise and programs?

4) Along with reading the Bible, are there ways we can develop a more accurate image of Jesus?

You've tossed out a lot to think about. As a writer who writes about Christ, there's a fine line between using Christ as a marketing tool and sharing Christ through your craft. It's something we all need to think about, pray about, and use wisdom.

Christoga is just another example of the parallel universe of Christian marketing. It seems as though we offer an alternative to the Christian consumer for just about anything that is available in “the world.” What next, “Christian” casinos and strip clubs?

As a result, we further segregate ourselves from the rest of the world where we need to be salt and light. I’ve been thinking a lot about this lately. I want to encourage the “artists” in our church to do more of what your sister is doing. I was very impressed by her recent show at that little coffee house in Santa Monica. She packed the place out and I’m sure the crowd was mixed with people who are at all kinds of various places and stages of the spiritual journey. Angela didn’t preach, but her own faith journey was evident through her songs and banter between. In that context, her art had to stand or fall on its own merit, and from the response of the crowd, it stood tall! On the other hand, when we retreat into our evangelical ghetto, we tend to come up with silly things like Christoga that only appeal to some on the “inside.”

Now here’s a radical suggestion. How about instead of Christians who like to do yoga creating and retreating into Christian alternatives, getting out and going to the neighborhood yoga studio. If/when the yoga instructor encourages the participants to take on some practice of eastern mysticism, the Christian simply replaces that with prayer/meditation or repetition of scripture. You know what might happen? No, the Christian probably won’t somehow be overtaken and pulled into the new age. Instead, the Christian person might actually have a chance to make some friends and shed some real light of truth on the spiritual seekers who flock to the yoga classes.