During television commercials, I usually get up for a snack, a stretch, or any little diversion that allows me to avoid watching the ads. But sometimes, I feel too pooped to exert the energy required for standing. So I sit there and just let my eyes glaze over for the four minutes of commercial agony.

I was attempting to ignore a Kia commercial when my ears perked up at the words "kick ass." I couldn't believe a commercial would use the a-word, so I pressed rewind on the Tivo remote. Sure enough, there it was. That same night, I watched a commercial suggesting I drink Pepsi while naked, and a Nike spot that praised "boobs" (of the female variety, not the British one). In another, a pre-teen spells out "OMG" in a Cingular commercial. (The ad translated her acronym to "Oh my gosh," though that usage of God's name is rarely softened on television.)

While I'm not surprised by the words used in the commercials--anything goes on TV these days, right?--I was shocked by the tone used for the words. It was commonplace. Natural. Normal and informal. References to bottoms and breasts were spoken as if the words had been "weather" or "mayonnaise."

Seems my generation considers many naughty words to be everyday language. I recently attended a young-adult church event where the speaker was a pastor who used such colorful language as "heck," "PO'ed," and "crappy." Nowadays, I guess those aren't considered swears anymore. And honestly, I probably wouldn't have blinked twice at the pastor's language. Except that night, I was sitting next to my mom. I saw her wince every time the pastor used a bit of colorful language. Afterward, I asked her what she thought of the pastor's presentation. "I guess I'm used to people talking that way these days," she said with a sigh. "But it makes me sad to hear it from a pastor." 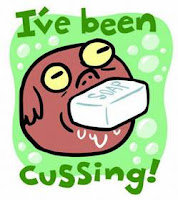 Of George Carlin's 1972 list of "Seven Words You Can Never Say on Television," one word, "piss," is now commonly used by, um, just about everyone. Including that young pastor. And me. I work with teenagers, so I make every effort to watch my language in front of them. But I've noticed how some of the more widely used potty words have slipped out when the students aren't around. I've said, "I'm pissed off" and "I feel like crap." I've said, "That's so gay" and "He's a retard." My current fav is "Dangit!"

I've tried to clean up my act, and it's really been difficult for me to stop swearing and making deprecating remarks because I enjoy them so much. I like to use this language because it provides a quick release of emotion. Since I don't usually swear, these words get people's attention. Others are quickly clued in I either want to talk about an issue, or I definitely don't want to talk about it.

And it greatly bothers me because I'm well aware of what the Bible says about speech: "Do not let any unwholesome talk come out of your mouths, but only what is helpful for building others up according to their needs, that it may benefit those who listen" (Ephesians 4:29, NIV). I love the simplicity of the CEV translation: "Stop all your dirty talk. Say the right thing at the right time and help others by what you say."

My use of profanity is always negative and helps no one. In fact, my swears probably hurt people. While it was no biggie to me when that young pastor said he was "PO'ed," his word choice sure made my mom feel sad.

As a youth leader, I know it's important to guard my words. Some students from our youth group regularly say, "Oh my G--!" Except they use God's whole name. Meanwhile, I'm so offended by taking the Lord's name in vain I refuse to even type out the saying. This is offensive to God, and the Bible is clear about this (Exodus 20:7).

I could probably make a strong case for the difference between swears involving bodily functions and blasphemous ones. But before I can dismiss my poo synonyms as benign, I have to think, "Can my teenage students really differentiate between my use of "crap" or "dang," and their use of "Oh my G--!" Probably not.

So rather than defending my words, I'll try to take 1 Corinthians 8 to heart. In that chapter, Paul discusses whether Christians should eat meat that had been offered in the temples of other gods. Paul probably shocked a lot of people by saying it was OK to eat this meat. At the same time, he cautions that one's actions can negatively affect others: "Don't cause problems for someone with a weak conscience, just because you have the right to eat anything. ... Suppose a person with a weak conscience sees you and decides to eat food that has been offered to idols. Then what you know has destroyed someone Christ died for. When you sin by hurting a follower with a weak conscience, you sin against Christ."

Then Paul brings it home by pledging to change his own behavior: "So if I hurt one of the Lord's followers by what I eat, I will never eat meat as long as I live."

I'd like to believe it's OK for me to use little swears like "crap" because it seems insignificant--many people don't even consider it a swear. Here's the thing: Why would I want to put myself in the position of having to explain myself to God or others? Would I drink half a glass of wine in front of an alcoholic, then explain, "I'm drinking just this small amount because I won't get drunk and I can enjoy it without going crazy." 'Course not. It's selfish and disrespectful. Just because I have the right to behave a certain way doesn't mean I should do it.

We use swears to express our own negative emotions or to insult other people. Maybe we use them because it's easier than discussing what's troubling us, easier than trying to tell a friend how they've hurt us. Maybe the swears protect us by pushing people away rather than letting them in through disclosing our deepest feelings. Sometimes, they just make us feel cool--we're on board with the latest foul lingo that's edgy yet can be used in public.

Personally, I'd rather not hear, "Oh my G--!" everywhere I go. I'd rather not see the day when 7-year-olds are casually saying the f-word on TV. Maybe it won't make any difference whether I stop saying "crap." But maybe it will. At the very least, it will make my mom happy.

If Paul was willing to go without a whole food group, I guess I can keep trying to hold my tongue.

To ponder:
1) Do you think there's a difference between expletives about God, hell, bodily functions, etc.?

2) Why do you think our society swears more now than in past generations?

3) Holly sez: "It's really been difficult for me to stop swearing and making deprecating remarks because I enjoy them so much." What things in your life are you trying to let go of? Why do you think you hold on to them? How do they seem to benefit you?

More:
Aw, Shucks: Are Americans Getting More Swearful?
Posted by Holly at 1:11 PM

I'm glad you wrote this. As I've gotten older, my mouth has been spewing increasingly more poo. Not the really bad stuff, but I love to use the ocassional "freakin".
I don't think I will anymore.
So, thanks.
P.S. I look forward to reading your blog on TCW. Mine is up this week.
:)
NK

Thanks, Nancy! It's always nice to hear I'm not the only one. And thanks for your great words on the TCW blog.

Readers: You can check out Nancy's thoughts on being a "terrible friend" at:

Growing up, my mother did not allow us to use what she called "slang" words. Golly, gee, gosh, were all banned, and the only words we could use regarding our back side was "behind," "fanny," or "rump." The b-word would have brought serious punishment.

It bothers me greatly that so many Christians are now using slang words with no second thought, and I've found myself doing the same thing on occasion.

Lord, help me to stop! Thanks for the reminder.