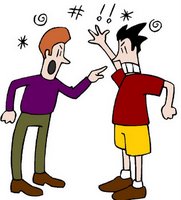 Have you said the F-word today?

The Associated Press referenced the poll to come to this shocking conclusion: Americans are swearing more than ever.

OK, so it's not shocking to any of us. And maybe that's part of the problem.

We've gotten so used to hearing synonyms of "butt" and "poop" on TV, it doesn't even register a blip on our morality radar. (Not to mention our great-grandparents would have fallen into a dead faint on hearing the words "butt" or "poop.") And who bats an eyelash when God's name is tossed around as lightly and commonly as a comma in a sentence?

Lest I get too high and mighty myself, I'll admit I sometimes drop the C-word (one of those "poop" synonyms) when I'm angry. Or sad. Or bored. Or hungry. People laugh at me for thinking it's a swear word. But when that word slips past my lips, it troubles me deeply. I think to this Bible verse:

"May the words of my mouth and the meditation of my heart be pleasing in your sight, O LORD, my Rock and my Redeemer." Psalm 19:14

I know both the word and the sentiment in my heart aren't pleasing to God. So why do I say it?

Some interesting findings from the AP/Ipsos poll:

(Personally, I'd like to see demographics for those who use the F-word at least three times in each sentence. They must all live near me because I seem to run into them every day. But now I'm just talking foolish, so I'd better get back to the point.)

I guess I've gotten into the habit of using a swear word to describe my feelings. I have plenty of words at my disposal that are far more specific and telling, and using them doesn't require any extra effort. Honestly, it's just such naughty fun to let a curse word fly. I'm being a rebel, breaking the rules, walking my own path ...

Wait a minute. Seventy-nine percent of those polled said they use profanity ... I'm not walking my own path. I'm just being foolish along with everybody else.

The truly unique path--and the hardest one to walk--is the way of the Cross. On April 1, this day we dedicate to all things foolish, here are some wise words to ponder from the Wisest One:

Wise men store up knowledge, but the mouth of a fool invites ruin. Proverbs 10:13-15

He who guards his mouth and his tongue keeps himself from calamity. Proverbs 21:22-24

Pleasant words are a honeycomb, sweet to the soul and healing to the bones. Proverbs 16:22-24

Do not let any unwholesome talk come out of your mouths, but only what is helpful for building others up according to their needs, that it may benefit those who listen.
Ephesians 4:28-30

With the tongue we praise our Lord and Father, and with it we curse men, who have been made in God's likeness. Out of the same mouth come praise and cursing. My brothers, this should not be. Can both fresh water and salt water flow from the same spring? James 3:9-11

The mouth of the righteous man utters wisdom, and his tongue speaks what is just. Psalm 37:29-31

Profanity is creeping into our culture more and more, though it still doesn't hold a candle to other countries. I hear talk from other friends in 2-3 other contries, and they swear 10 times more than any American I know. Its hard to listen to since I'm used to the f-word being a exclamation rather than an adjective for everything. I still try and keep a lid on my swears while I talk to them, though its easy to go down that road when you hear it all the time. Lack of swearing for me is a sign of maturity and so I try to control mine.
-Judy