Scientists Question Whether Jesus Walked on Water or Ice 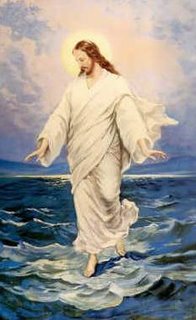 A team of scientists has proposed Jesus could have walked on a patch of floating ice in the Sea of Galilee. They are stating this is a possible explanation for the biblical story of Jesus walking on water.

The team reviewed temperature records of the Mediterranean Sea surface, and used analytical ice and statistical models in a study of 10,000 square feet on what is now known as Lake Kinneret in northern Israel. Their conclusion: Ice patches may have formed there during the decades in which Jesus lived.

They also determined the chance of ice patches forming in this area today is essentially zero. So much for putting the theory to the test.

Every few years, a study comes out that either seeks to explain the science behind a biblical story or to dismiss it as fiction. And MSNBC.com puts the point right out there: Within their report on the ice theory, they link to a live vote with the question, "What's your view on the accuracy of the Bible?"

It seems every scientific study related to the Bible comes back to this question. The current results of MSNBC's unscientific poll:

Another study rocked my faith a decade ago. A reputable news magazine published a piece in which historians postulated Jesus never called himself the Son of God or the Messiah. I was at a place in my life where I didn't want to need Jesus anymore, and that study was all the incentive I needed to kick him to the curb. It took many years to restore my faith in who Jesus is, and many years to heal the damage of a fly-by-night theory.

These days, when I read these studies, I ask myself one question of basic logic:

I have to trust the Bible isn't called the "Word of God" for nothing. I can't image God would allow humans to trounce around referring to a book as His Words for thousands of years if it wasn't true. So if I believe in God, I ought to believe in his book, too.

It would be an outright lie to say I never doubt the Bible or God. Doubt is vital in my life. It forces me to face off with hard questions, and through probing study and prayer, I get spiritually stronger. Even when I don't reach 100-percent clarity, struggling with an issue always reaffirms two things: 1) God is way smarter than all us humans put together; and 2) I'm not God, so I don't need to have every answer right now. (Though I fully intend to ask him for some answers when I meet him later.)

When I'm facing doubts, it's edifying to hear the stories of other Christians, why they believe as they do. And it helps to recount my own story of faith, too.

In fact, a friend asked me this week to share why I stopped believing in Jesus at one point, and how I came to trust in him again. It reminded me of that old news article, how it affected me so many years ago. Nobody's talking about that old article anymore, but the Bible is still in full-force ... and thus, understandably, still under fire.

To ponder:
1) At those times when you doubt your faith, what do you do?

2) Do you believe the Bible is literal and accurate? What are the reasons for your thoughts on this?

3) Is there a particular portion of the Bible or a story you struggle to see as factual? What has caused you to struggle with this?

4) What caused you to become a Christian? Think about every detail leading up to this decision.

When I taught Sunday school to a bunch of unmotivated 7th graders, I tried above all to impress upon them one thing:

Whether a story is true is not as important as the message of the story.

If we accept Christ as our savior, as the perfect atoning sacrifice, the details of most storiers don't matter.

So what if Jesus walked on an ice floe, not water! It was still Peter's lack of faith that made him sink when Christ called out to him.

I love taking examples like this and turning them around on people that like to confront me with so-called proof of anything. I just can't always do it eloquently.

So what if there was no Adam and Eve, talking snake, and forbidden fruit! Humanity since the beginning has arrogantly thought it knew right from wrong as well as God did.....

With the whole Da Vinci Code craze - so what if Jesus had a wife and children! He, and he alone, conquered death on Easter morning.

It's interesting how much theological discussion you can cause just by saying "SO WHAT?!?!"