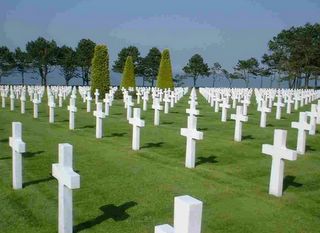 Today, many Americans are contemplating life and death.

Among those are men and women who should have been at the Twin Towers or the Pentagon on 9/11 five years ago when terrorists attacked. But for various reasons, they were late for work that morning. Some label their close call as sheer luck. Others say it was divine intervention. And some question, "Why me? Why didn't God save many others from death that day?"

Because she stayed up late Monday night to finish a master's thesis, former Louisville-area resident Elizabeth Kramer was slow getting to her job with the Peace Corps yesterday morning in the World Trade Center complex. ... "The first thing I did was look for a pay phone to call my mother. I waited in line. A woman next to me was crying. She worked in the first tower that was hit. Her colleagues were on the floors that were burning. She had been running late to work, too." (The Courier-Journal, Kentucky)

Four friends who called in late for work because they stayed up the night before to watch a Giants game on "Monday Night Football" missed being there when the planes hit. (The News Journal, Delaware)

A worried woman approached Seamus Campion to ask what was going on, saying she was late for work at Cantor Fitzgerald, a bond trading firm with offices above the 100th floor in the first tower. Those floors were completely devastated; no one made it out alive. "I gave her a hug and told her she was safe, and to stay where she was," Campion says. (Daily Herald, Illinois)

On a routine day, Bud Flanagan would ride an elevator to a sky lobby on the 78th floor, where he'd board another elevator for the 105th. He usually was at his desk by 7:45 a.m. But that Tuesday, he was running late. ... Two phone calls [to his home that morning] and a brief conversation: If not for them, Flanagan would have been in his corner office, high up in One World Trade Center that morning. (The Virginian-Pilot, Virginia)

"I take the bus into Manhattan every day, which leaves me about two blocks away from WTC," Debbie Archimbaud said. "The bus was running just a couple of minutes late. I was a little annoyed, because I wasn't going to have enough time to read my newspaper at my desk before I started my day. As I was walking toward the WTC, I decided to stop for a cup of coffee and a muffin at one of the street carts. I rarely do this anymore, but I hadn't eaten dinner the night before so I was a little hungry. These two miniscule details—a late bus and a muffin—saved my life." (Pocono Record, Pennsylvania)

Lorraine Wallace was one of those people who routinely arrived at work 15 to 30 minutes early. But on Sept. 11, 2001, the 20-year-old felt sick and was late for her job as a finance manager at Landmark Education. The office was located on the 15th floor of the North Tower of the World Trade Center. ... "The funny thing is that day everyone in my office was either running late or sick. Fifteen people worked there and everyone was not there except for one person, who made it out OK, and one was just entering the building but was evacuated. Literally, everyone just missed the train, was off that day, or was sick. It was weird. Our manager always wanted people to be on time. I’m very lucky." (The Times-Reporter, Ohio)

Rob Herzog was not among the 297 people from Marsh & McLennan who died that morning when American Airlines' Flight 11, a Boeing 767, slammed directly into their office. ... It had been a morning of improbable delay. He was still exhausted after returning from a trip to California, so when the alarm rang, he reset it for a half-hour later. He had to drop off laundry and pick up mail. The C Train is a local run and makes many stops, but when he tried to transfer to an express train that would take him directly to his destination, the door literally closed in his face after he pushed through the commuter clog. ... "I really have struggled with the whole question of why I was saved when others weren't. Was God looking over me? And if so, why was he looking over me and not the other people in my office?" (The Tampa Tribune, Florida)
_____________

A friend forwarded a piece that's been circulating on the Internet about those who were late to work on Sept. 11, 2001. It suggests we should count our blessings when we're tied up or running late—that God may be putting us in the right places at the right times, or keeping us from the wrong ones.

I know many Christians who point out how God was at work on 9/11, how much good came out of the horrific events of that day. Like them, I tend to look exclusively on the bright side of every dark day, even ignoring all negative effects. Yet I wonder if I should consider the dark reality that life can be lonely, sad, unfair, painful, and short. Maybe sometimes, we're meant to realize, "Hey, life stinks. There's got to be something better than this."

Today, I'm contemplating life and death. And while I'm grateful for the former (and glad I haven't had to face the latter), I want to be thankful for more than what I've got now. I want to remember there's something beyond both.

More:
Is God Really in Control of Our Lives?

To ponder:
1) What are you thankful for?

3) How do you deal with the tragedy of 9/11? Has it affected the way you think about God?

4) Read "Is God Really in Control of Our Lives?" Do you feel every event is part of God's good and perfect will? Has your thinking about this topic changed over the years? If so, what caused your change in thinking?
Posted by Holly at 3:37 PM

Thank you for sharing these. I just happened to be thinking about how sometimes a "bad day" is truly a blessing in disguise.

Devastated for the people who died on 9/11, and at the same time glad for the ones who did not make it to work that day, or on one of the planes. I believe when it is your time; It will be your time, but it does say in the bible from God; Time and circumstance is unforseen for all..alot of times we believe that God took the person, but it is the evil that is here with us that causes these bad things to happen and taking lives..God doesn't want our lives over...he intended us to live forever, but Satan is the ruler of this world til the Kingdom comes and makes things right again...alot of people may not believe this, but I am happy in the fact I do.
ONE PERSON'S OPINION.

God cannot be with us all the time, it is energies that we're born with (destiny) that was with us. Destiny works in miraculous ways!

Actually, the Bible states throughout that God can be with us and is with us.

Check out the many verses on God's omnipresence here: http://www.openbible.info/topics/omnipresence

A few verses about how God is with us, and how he is responsible for what happens to us:
God’s words to Israel:
“Be strong and courageous. Do not be afraid or terrified because of them, for the LORD your God goes with you; he will never leave you nor forsake you.” Deuteronomy 31:6

Jesus’ words to his disciples after his resurrection:
“And surely I am with you always, to the very end of the age.” Matthew 28:20

“Jesus Christ is the same yesterday and today and forever.” Hebrews 13:8

“Every good and perfect gift is from above, coming down from the Father of the heavenly lights, who does not change like shifting shadows.” James 1:17

I feel death should be discussed even with small children. As for 9/11, my mom's brother was in his office in the N-Tower when AA 11 crashed into the building. He died instantly we think from the fires that destroyed the building eventually. He was on floor 96.

My dad's friend worked in Tower Two but managed to escape before the doomed building was destroyed. His office was low down I think on the 4th or 5th floor of the building. Ten minutes after the first plane crashed, he fled and witnessed the second plane striking the building.

My mom's friend's brother worked in the World Trade Center. His life was spared because his newborn baby girl kept him up all night causing him to be late that day. Keep in mind, he is usually always on time. It was truly God!