Three Blind Men and an Elephant 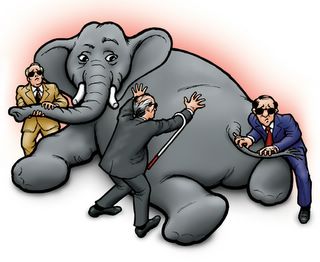 I believe that Brooke writes from the perspective of someone who, like me, grew up in the church, has lived with it their whole life, and feels constantly challenged to keep their faith vibrant and invigorated. For many longtime Christians, no less a definition of faith than Brooke's is necessary, or it wouldn't be authentic faith at all.

But I think it is important to introduce the notion of humility and God-dependence to the definition of what it is to be a Christian. I think of those vineyard workers who got in at the very last hour, and I feel that what all authentic Christians must have in common is a belief that they are not capable of pleasing God on their own merits. All Christians, whether recent converts or lifelong servants, must believe that they are completely dependent on God's provision and not their own works if they are to be in fellowship with God. I believe this is the quality that God has looked for in humanity throughout history, whether Old Testament saint, New Testament apostle, American philanthropist, or animistic tribesman. For each and every one of us, the question is, have we looked at the glory of the God who created us, and the shortcomings within our own hearts and then thrown ourselves on God's mercy and declared like Job, "There must be a mediator who can make peace between God and me, someone outside myself who can bridge the gap between God's righteousness and my own weakness."

This whole discussion demonstrates that a relationship with God is somewhat
like a prism--we're all examining the same gem, but it reflects back different
things depending on our perspective.

That to me is the bare minimum definition of what it means to be a Christian--to believe that Jesus Christ was that mediator and God's provision when we could do nothing redeeming for ourselves. For those who have never heard of Jesus, I believe that the stirrings of such a natural theology are what God responds to, and that He will move heaven and earth to introduce His Son to such a humbled heart.

And once we have become a Christian, the challenge is to keep humility and thankfulness at the forefront of our attention, motivating our actions, and that authenticates the reality of our faith.

This whole discussion demonstrates that a relationship with God is somewhat like a prism--we're all examining the same gem, but it reflects back different things depending on our perspective. That is why the Bible chronicles God's workings in the lives of hundreds of vastly different people--because it is possible to have vastly different experiences of the same God.

Liberal theologians use that as a stumbling block, and try to say that God is whatever you want him to be; I think what we are saying is that God is one clear thing--immutable--revealed perfectly in Jesus Christ--but once Jesus takes up residence in a human heart, He expresses himself in a thousand surprising and beautiful ways.
____________

Holly says: The best part of this discussion is we're thinking and talking about what it means to be a Christian. The more often I discuss this topic with other Christians, the more comfortable I become talking about it with friends who aren't Christians.

Thinking about it also gives me a greater confidence in what I believe, and what's important to my faith. It's easy to get caught up in the worldview of Christians: as crazed, hypocritical Bible thumpers, religious snobs who wear gold crosses around their necks and thumb their noses at the rest of the "lost sinners" of the world. Whenever I see someone with a "Jesus Loves You" bumper sticker who drives like a maniac and flips other drivers the bird, I think, "Boy, I gotta prove Christians aren't like that. I gotta counter those stereotypes." And I put my energy into trying to compensate, telling others, "Not all Christians are like that."

To close, here's a verse that popped into my head when I read Kevin's comment:

Now all we can see of God is like a cloudy picture in a mirror. Later we will see him face to face. We don't know everything, but then we will, just as God completely understands us.
--1 Corinthians 13:12, CEV
Posted by Holly at 11:34 PM

Hi!
I have enjoyed reading the different perspectives on this issue.
Most often when I hear people disparage Christianity, they are not always talking about what they've read in the Bible, but rather what they've heard from Christian people--leaders and otherwise. And, it makes me want to tell them, but that's not all Christianity is about!
I didn't grow up in the church; I became a Christian in my late 20s. I got the sinner part of the equation quite easily. It was easy for me to see the gap between (as Kevin puts it) "God's righteousness and my own weakness." I accepted that Jesus bridged the gap, but amazingly enough, that wasn't enough to make me a Christian.
What did was understanding about God's unconditional love. Understanding that soften my heart-- yes, I felt convicted as a sinner, but not condemned. It wasn't the end, but the beginning of a new life full of blessings (despite occassional hard times).
Love made all the difference for me.
Now, this may not work for everyone. For me, acceptance was an issue -- once I realized God accepts me where I am, it was easier for me to embrace Christianity and to move forward and learning how to become more Christ-like. Others might need something else to get to that point.
That's why I liked that Jesus approached people where they were spiritually, emotionally, and physically, and gently guided them to the truth. I think that's probably our best chance of letting people know about our faith.
Thanks again for all the food for thought!
Tina