What Ever Happened to Community News?

A heads-up to regular H-n-T readers: I'm straying from my usual discussion of issues related to faith and the Christian church today. In light of a recent string of layoffs and firings within the Los Angeles Newspaper Group, in which my friend Walt Weis was let go, I wanted to make some observations about the decline of community newspapers, particularly The Inland Valley Daily Bulletin. I grew up with this newspaper and worked there for three years as a reporter, a copy editor, and a page designer. I'm one of the few people who can actually speak openly on this topic without fear of getting blacklisted from the newspaper industry. 'Cause I'm never going back.

I posted the following in response to an article on the decline of Southern California community newspapers in L.A. Weekly; it's also on L.A. Weekly's site:

I'm an Ontario native. My parents were both born in the Inland Empire. They, and everyone in our extended family, had always subscribed to the Daily Report/Daily Bulletin. Not anymore. 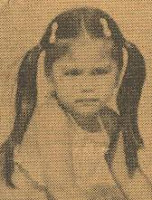 That's because its local quality is gone. My parents are working-class folk who didn't want The [Los Angeles] Times. Or The [San Bernardino County] Sun: They wanted to see photos and stories of people within their own community. We have now-yellowed, faded clippings from old Report/Bulletin issues. These include a photo of me at age 3, at Guasti Regional Park. It was taken by Bob Swetnam, a Progress-Bulletin photographer. I never met Mr. Swetnam, but my friend Walt Weis worked at the paper for enough years that perhaps he knew him.

In my youth, I thought of the reporters and photographers at the Report/Bulletin as hometown heroes. My parents recognized their names from reading them daily. These local journalists were well-respected for their tireless work to keep us informed about the happenings in our community.

In 1997, I was thrilled to land a position at my hometown paper, The Daily Bulletin. I still remember introducing my parents to some of the journalists, including Walt. For Mom and Dad, it was like meeting celebrities. (Literally: "WOW! That's the Walt Weis whose name we see in the paper!") That was a wonderful time at the Bulletin: I didn't make much money, but I felt treasured as an employee. Donrey held regular thank-you luncheons for us, and we had monthly clips and photo contests where we were recognized with certificates--and money!--for excellent work. (I loved these paper pats-on-the-back, and still have my stack of certificates.) There was even respect and well-wishing for employees who were moving on: The company bought cakes and gave farewell parties on their last day.

Morale was sky high; personally, I jumped out of bed every morning, excited to get to work. One of my most treasured possessions is a Quill pen with the Donrey logo--employees received this for their one-year anniversary. Lest anyone think I'm overstating how great the Bulletin was during this time, I could refer you to my current pastor: I once called his cell in a panic because I'd thought I lost my "lucky pen" at church! Most of my years at the Bulletin are an excellent memory.

Most of them. When the Los Angeles Newspaper Group (LANG) merger occurred in the summer of 1999, I knew it was time to leave. There was talk of downsizing, specifically within the entertainment/lifestyle department where I worked. As I understand it, these departments are essentially gone now; the articles for these sections are either wire pieces or are written by writers from other papers. But why would anyone pay for this material in the Bulletin when they can read it online for free? My family--and many readers I met as a Bulletin reporter--subscribed to the paper largely for the localized angle, which offered information on OUR restaurants and attractions, OUR events. Our people. The Bulletin even provided recipes from local chefs and housewives. We had stories about the hot styles that actually were trends in the Inland Valley--complete with local models. Our neighbors were the ones featured and photographed in health, food, fashion, and auto stories. We had photos of locally restored and souped-up cars, the ones you'd actually see driving down Euclid Avenue or Foothill Boulevard. Maybe talking about capris being in style wasn't unique, but the quotes about this trend were from residents of Ontario, Upland, Rancho, etc. And the photo of the girl wearing the capris was of a local teen. Yes, Mr. Singleton, that photo of our neighbor's daughter actually sold newspapers. [William Dean Singleton is the founder of MediaNews Group, which includes LANG.]

Obviously, interacting with the community was a lot of work. But it was so worth it when a mother would come into the office and buy a stack of newspapers because her child had been featured. My biggest heartbreak was the disappearance of the Bulletin's "Kids" section, which Shannon Guthrie and I built from scratch as a way to encourage young people to read. Actually, Shannon pushed me into it, but I was thankful for her vision and the Bulletin's willingness to take a risk back then. It was very popular--so much so, Donrey interviewed Shannon and me on how we created the section! Donrey used our success as a model for their other newspapers. Again, here was a section that featured local teens and kids, for which we received tremendous feedback from the community, and it additionally served a higher purpose. Yet it was one of the first sections to fall after the merger.

I'm baffled about the decision to un-localize: to use wire stories and pieces by out-of-area reporters to "save money." To "save the community papers." Articles about locals--and the accompanying feeling of ownership--was the Bulletin's main selling point. As was the celebrity and relationship with familiar, long-time writers and photographers, such as Walt Weis. I'm guessing other locals were as disappointed in the Bulletin's changes as my parents: The Bulletin's daily edition circulation for March 1997 is listed as just over 57,000 on the MediaNews Group website--that's nearly a third lower than it was a decade previous, when I went to work there.

As a reporter back then, I did most interviews face-to-face with community members, because that's how I was taught to do it at the Bulletin. People were excited to meet me. I developed a deeper appreciation for the community that gave me a job, and they in turn developed a deeper love for their local newspaper.

Yes, I know things have changed since then. Yes, I know it's about advertising, not subscription, dollars. But in a day when news about everything is readily available, yet people can't find the news that matters most to them, local papers with a local angle surely could be the new, hot commodity. If, indeed, Dean Singleton truly and nobly wants to save the local papers, then he must save the format, too. Let MSN.com give readers all the AP stories. Give my parents and their neighbors the story about their friend who makes the best strawberry jam in town. That's what they long to read.

Mr. Singleton, I'd like to appeal to your sense of leaving a legacy for a moment. People long for community. We lack community. There is little that ties us to our neighbors anymore, and as much as we'd like to know one another, we lack a basis on which to connect. You hold an incredible medium to bring people together. As the owner of most SoCal newspapers, you could do something huge that would bring people together. Unite 'em by reminding them of their shared experience, and showing them who their neighbors are.

There was a mass exodus after I left the Bulletin. I'm sad to hear that great talents who hung on, like Walt, were given the boot despite their loyalty. Walter took my wedding photographs, for free, because that's the kind of guy he is. He well knew my situation as a writer who was struggling to pay the rent AND eat because he'd lived it for decades.

[The following paragraph is in response to another comment on L.A. Weekly's website.] Lastly, as a college-educated writer, and as the daughter of a blue-collar union worker, I'm tremendously distressed that someone, who apparently works for LANG, is mocking journalists as "people with college degrees who think they deserve better than what them dumb union hacks get." This is an all-around insult to hard-working people of every situation. Mr. Singleton and Mr. Lambert [Lambert is the current Bulletin editor], if you know who wrote this comment, it is morally incumbent upon you to correct this attitude. Journalists dedicate their lives to giving far more than they'll ever receive. None of your employees deserves such disrespect.

I've posted my full name so as to be accountable for my words, and to encourage LANG journalists who have memories of your own glory days. You are amazing: Persevere!

As Weis says, “There was competition then. Journalists were screwed the minute Singleton was allowed to buy nearly every paper within a hundred miles and start squeezing the life out of them.”

We have traded community for corporatism. Deregulation of markets have consequences. Capitalism becomes a monster without regulation to protect such things as fairness and competition. There are certain winners and losers in this insane "Free Market" economy of the last 30 years. The question is, "Who is winning and who is losing?" Think about it...