What's Your Evidence for the Existence of God? 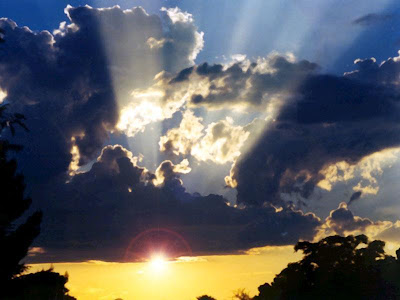 I believe in Christianity as I believe that the Sun has risen, not only because I see it, but because by it I see everything else.
--C.S. Lewis, from "Is Theology Poetry?" in The Weight of Glory.

This week, I asked a student from my church, "What evidence do you have for the existence of God?" Honestly, I was hoping he'd mention something he'd learned in our youth group. (He didn't.) But I was still pretty pleased to hear his answer: prophecy. He went on to tell me some stuff he'd learned on The History Channel. Apparently, The History Channel is a better teacher than I am.

After I got over the initial blow to my ego, I started to wonder: Could I answer that question myself? What evidence would I give? This week I also read an interview with Michael Shermer, the founding publisher of Skeptic magazine. Shermer had become a Christian in high school, then turned away from his faith in graduate school because atheism (or "skepticism," as he dubs it) seemed intellectually superior.

This is partly why I challenged my teenage friend. He is extremely bright, and while I hardly want to be the one to provoke him to a "crisis of faith," I know he'll encounter doubt sooner or later. As soon as I'd asked him the question, I knew I'd better be prepared to offer an answer myself.

It was--to my delightful surprise--very easy for me to outline my reasons for belief in God. My evidence was collected essentially in this sequence, following my own crisis of faith as a teen:

2) Nature, including the way I perceive it. The world around me appears designed. When I look at nature--really stop to contemplatively look--I'm always awed.

3) A transparent, authentic Christian. I met Penny during my crisis of faith. I admired her and wanted to understand what motivated her natural and total trust in God, and her complete surrender to him. In particular, I wanted her joy: She had a positive attitude despite negative circumstances.

4) A sense of God's presence and direction. There were too many "coincidental" exchanges and interactions in my life to be mere dumb luck.

5) Statements made about God's presence by people I trust. Why would God's presence feel real for so many people if it wasn't really real? The idea of "mass delusion" seems as plausible to me as the idea no one truly exists (ie. we only perceive we are here interacting with one another.) There are many things children stop believing as they age, yet the concept of a higher power persists among the vast majority.

7) Jesus as deity: His own statements as recorded in the Gospels.

9) Biblical prophecy regarding the Messiah and fulfillment in the person and life of Jesus Christ.

10) Physical evidence. Seeing artifacts (such as the Dead Sea Scrolls) and learning about the historical and cultural background of biblical times reinforces biblical events as factual.

11) Christian martyrs. The willingness of members of the early church--and of those in the persecuted church today--to die for their faith in Christ.

I love the evidence--physical, intellectual, and relational--God has provided in my life. I love that he allowed me to weigh the evidence and come to my own conclusion. And I particularly love the way he continues to provide exactly what I need, when I need it. After reading a little more about Michael Shermer (it always makes me feel crummy when atheists/agnostics/humanists suggest Christians are naive folk who can't think for themselves), I came across another article by atheist-turned-Christian Alister McGrath:

Breaking the Science-Atheism Bond
As an atheist turned Christian, I know atheism is not the only conceivable worldview for a thinking person.

I'm thankful God has stuck me in seminary right now, so I have access to great resources for my teen-age friend. I figure he'll be out-thinking me soon enough. Who knows--maybe I've got the next Alister McGrath or C.S. Lewis under my wing--and maybe he'll soon be writing stuff that helps me grow spiritually.

To ponder:
1) Do you believe it's possible to be an "intellectual" and a Christian? How would you respond if someone suggested Christians are brainwashed, naive, ignorant or just plain dumb?

2) What evidence do you have for the existence of God?

3) How can you use your evidence to help others?

(Holly says: "I wouldn't just hand someone my list then expect them to say, "Wow, now that I've read this, I believe!" However, I can use my experiences as suggestions others might consider during a crisis of faith. And I can reflect on the people who have influenced my own faith, and try to offer to others what friends like Penny gave me: honest reflections on my own struggles, doubts, and fears, and real-life stories of how God has supported and sustained me.")