H-n-T Celebrates One Year of Blogging 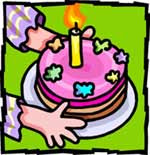 Here are some stats for the year:

From April (when Site Meter began tracking traffic to the site) through the end of 2006, there were 1373 visits to the blog.

About one-fifth of the total visits in 2006 occurred in October, after Clay Aiken was mentioned in the post "Where on Earth are All the Missionaries?" Several Clay fan sites posted links to H-n-T. This piece also received the most comments--eight--of any single post this year.

Perhaps the most debated post was "Mainstream Media Offers Definition of Christianity." That post itself received six comments, and was followed by three more posts that further discussed and expanded on comments, along with yet another post on the topic of faith and works. What a great discussion!

Holly chose "Angels, Revisited" as her favorite post of 2006. What was your favorite post this year? Post your comments here, or e-mail Holly at contacthnt@gmail.com and let me know.

Mucho thanks to everyone who read, pondered, commented, and forwarded posts on H-n-T in 2006!

Way to go, Holl! Hooray for you blogiversary!