I visited Chandler, Arizona, last weekend for a wedding, and kept getting lost on the San Tan Freeway, which loops around in a way that left me baffled again and again. I'm sure it's a no-brainer for the locals to travel on, but I'm used to driving on the grid that is Los Angeles.

Even with my friend navigating in the passenger seat, we drove for nearly an hour and a half to get to the wedding. (We were using written directions rather than maps, and later discovered we'd gotten on the wrong part of "The Loop"--it should have only taken 20 minutes to get to the wedding site.) So I began referring to this road as the "Satan Freeway," deceptive and painful in every way.
Amusingly enough, just a few miles away from the Satan Freeway was Grace Boulevard. My friend and I had a good laugh as we passed Grace, then came to Dobson Road just before we hit Satan. "Check it out!" I exclaimed to my friend. "Dobson is between Grace and Satan . . . and I think Dobson is much closer to Satan!"
OK, maybe you had to be there. Kidding aside, I've been thinking about who I trust as spiritual leaders. When I'm looking for a good Christian book to read, the first thing I'll do is to look at who's endorsing it. If ChristianityToday.com says it's good, I'll think, Hmm, this book is definitely a keeper. And if a Christian author I respect--say, Rob Bell, or John Ortberg, or Liz Curtis Higgs--recommends it, I'll assume it's gotta be some good reading material. 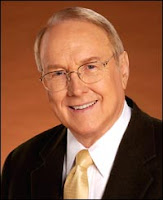 I've long looked to the "top dogs" of Christianity for guidance about everything from spiritual growth to politics and social issues. In particular, I've held high regard for Chuck Colson, founder of Prison Fellowship Ministries, and James Dobson, chairman of Focus on the Family. So I was more than a little disappointed when I recently found out both Colson and Dobson signed a letter last year that urged the National Association of Evangelicals (NAE) not to adopt "any official position" on global climate change because "Bible-believing evangelicals . . . disagree about the cause, severity and solutions to the global warming issue."
You see, Rich Cizik, the NAE's Vice President for Governmental Affairs, has been working with scientists over the past couple years to distribute more information about environmental problems to churches. And Cizik has been trying to get the U.S. government to notice the alliance between Christian leaders and scientists on this front. (Check out my previous post, "Evangelicals and Scientists Unite for the Environment.")
Cizik was making huge strides, but then hit a road block when Dobson, Colson, and other evangelical leaders essentially asked him to back down last year. This month, Dobson and two dozen other Christian leaders signed a letter to the NAE stating that if Cizik "cannot be trusted to articulate the views of American evangelicals on environmental issues, then we respectfully suggest that he be encouraged to resign his position with the NAE."
This weekend, NAE leaders drew the proverbial line in the sand in front of the Dobson camp. They gave tacit support of Cizik's work by not censuring him and by reaffirming the NAE's 2004 position that caring for the environment (they call it "creation care") is one of the main civic responsibilities for evangelicals.
Up until recently, I thought it was natural for Christians to be concerned about this planet God has created for us. I've recently discovered that some very influential Christians don't believe we have a responsibility to care for the Earth. And some influential Christians are even saying there's no such thing as global warming, that scientists (including some prominent Christian scientists) are deceiving us with global warming warnings.
Thus, there's a battle brewing between Christian leaders who want to promote environmental activism within churches, and other Christian leaders who believe the Earth was meant to be used up, since we will one day live in heaven with our Creator. The latter feels environmentalism distracts the church from more important social issues, namely gay marriage and abortion.
I should explain here that I'm both moved by and concerned about enviromental issues including global warming. I grew up under the brown sky of the Inland Empire in Southern California. While kids in the Midwest were having snow days, we had "smog days"--afternoons when the air quality was so poor, we'd have to stay indoors all day. Thankfully, the situation has improved thanks to California initiatives such as emissions regulations and mandatory car smog checks.
When the concept of the three R's--reduce, reuse, recycle--was presented to the public, my "waste not, want not" father immediately took the idea to heart. We recycled everything: tin cans, cereal boxes, milk jugs, detergent bottles, junk mail. My parents wash plastic food containers and reuse them. I haven't used paper plates in years, and I avoid using styrofoam cups. I've used cardboard boxes for crafts. I buy energy-efficient lightbulbs. And I combine all my errands into one trip to save gas. All of this stuff is easy, and much of it actually makes my life easier. I'm simply making a choice to have two trash bags (recycling and non-recyclable items) and to drive less. I'm happy to do anything that might keep the sky over Los Angeles bluer rather than grayer.
There's a classic Chico Marx quote, "Who you gonna believe, me or your own eyes?" And while I still trust James Dobson is a good and godly man, I gotta say that this time, I'm believing the pollution I've seen right in front of me truly does exist.
STAY TUNED! In Part 2 of this post, I'll further discuss the battle over global warming and environmentalism that's happening within evangelical Christendom.
MORE: Evangelical Body Stays Course on Warming
Posted by Holly at 4:21 PM